I bought an optically and cosmetically 135mm Ai-S f/2 with very stiff focus. On this lens the focus ring moves the whole heavy optics backwards (∞) and forward (MFD), so it will never be a light as other manual lenses. My copy was declared unusable by the seller, as it was really stuck. Usually this is because the grease has dried, calling for a disassembly of the focussing helicoids, cleaning, re-lubricating and reassembling, which I did as follows:

- First, focus to ∞, mark the position of the lens, I used small post-it labels.
- Remove rubber band (A). Surprisingly, just a Scotch tape holds the focus scale ring. Remove tape.
- Now, turn from ∞ to MFD, and beyond. After you pass MFD go slowly, and mark where the outer focus helicoid looses. The lens just splits in two pieces, the optical groups as a whole on one side (B), the rear bayonet and levers on the other (C).
- Remove the focus scale ring (D), and keep on turning the focus ring still attached to the rear part, slowly, until it detaches (E). Also take care and note the decoupling point.
- Now you have the lens as shown on the picture. My lens was completely dry on the small outer focus thread ring, in any case I've cleaned and re-lubed both. 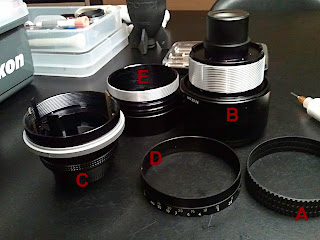 - Reversing the process is a little tricky, but nothing special, mount everything with the rings on their noted points. I used a small light to see the inner position of the aperture levers inside the lens, and played with small movements until everything was in place. Then, turning the lens towards ∞ assembles the whole thing. New Scotch tape, rubber band back, and you are done. Because the focus ring is on place with this Scotch tape, it allows for easy fine tuning of the ∞ position, in case you need to fix it a little. 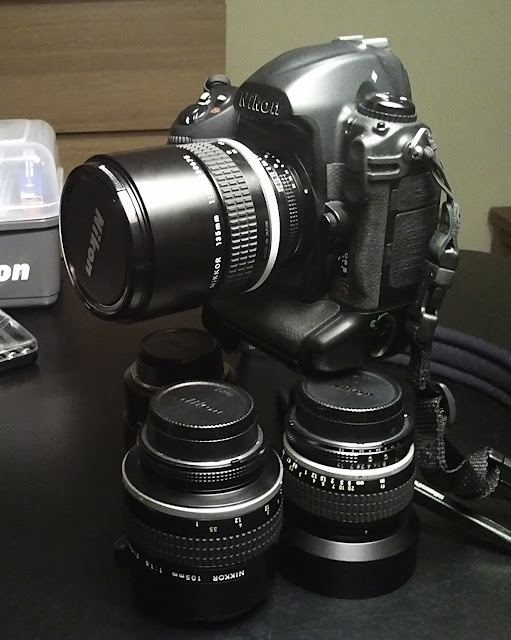